Deals Of The Day 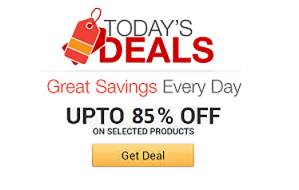 Find the coolest stuff at the lowest prices by browsing Amazon's incredible daily deals! You'll surely save a lot!

up to 80%at Amazon
Check Deals Explore the Land of Ooo along with Finn and Jake with the Adventure Time encyclopedia. The booklet comes jam packed with everything you ever wanted to know ... Learn to shred like the music gods in no time at all with the guitar learning system. This ingenious device goes over the guitar and shows you how to play ...